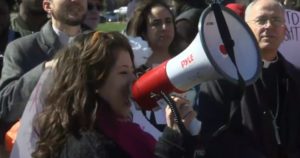 Monday is the deadline President Trump gave Congress to put into law the Obama administration’s Deferred Action for Childhood Arrivals program, and protect nearly 800,000 undocumented immigrants who came to America as children. There’s no fix yet to a problem that Trump himself created six months ago when he ended DACA by executive action.

The Supreme Court last week left in place a federal judge’s order temporarily continuing the program, thus denying Trump the chance to immediately carry out one of the cruelest policies of his presidency: deporting the Dreamers, as the DACA participants are known. Yet this is only a partial reprieve. Those who have DACA status can apply to renew the permits that allow them to be in the United States legally, but there’s no path for more than 1 million young people who do not already have DACA status and thus have no protection from deportation at all.

Over the last six months, immigrant community groups have had to become experts at suicide prevention as the anxiety of being caught by Trump’s agents becomes overwhelming for some, while thousands of immigrant youth have had to organize to fight for their right to exist in the country they call home.

Sometimes the casualties have been young children. Ten-year-old Rosa Maria Hernandezwas taken to a detention camp from her hospital room after surgery instead of being returned immediately to her parents. Cases of young people like Rosa Maria, who could be citizens if Congress passed the Dream Act, but who are instead targeted for deportation, should shock the conscience of any reasonable person.

The reality of Trump’s unnecessary and cruel chaos flies in the face of his words one year ago when he said, “We are gonna deal with DACA with heart,” because, “You know, I love these kids.” He, of course, has the executive authority to fix the problem immediately by restoring the DACA program he ended and stopping his drive to kill bipartisan solutions. Anything less is a callous determination to force mass deportation, which the American people do not want.