Home Resources Trump Considers Pulling Immigration Agents from California, Saying it Would Spur ‘Crime Like Nobody Has Ever Seen’ 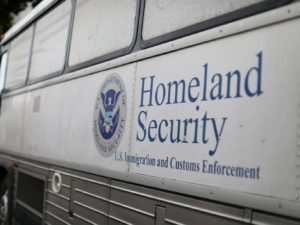 Donald Trump has threatened to pull immigration agents from California, suggesting their removal would unleash “crime like nobody has ever seen”.

The move was immediately welcomed by a top Democrat, who said deportations were shattering families.

In the midst of comments about gang violence, the President suggested the federal government was getting “no help” from California and mused about the effects of halting operations in the state by the US Border Patrol and Immigration and Customs Enforcement (ICE).

“If we ever pulled our ICE out, if we ever said ‘hey, let California alone, let them figure it out for themselves,’ in two months they’d be begging for us to come back, they would be begging”, Mr Trump said. “And you know what, I’m thinking about doing it”.

California elected officials, who have become accustomed to skirmishes with the Trump administration, rebuked the President’s comments. Senator Dianne Feinstein denounced his “insults and threats” as “mean-spirited” and “patently false”.

“In California we protect all of our people from criminals and gangs, as well as dangerous assault weapons,” Governor Jerry Brown said in a statement. “We do our job Mr. President, you do yours.”

So-called “sanctuary city” laws, which wall off local law enforcement from federal immigration authorities, are a frequent target of Mr Trump’s ire. California responded to Mr Trump’s election by enacting a law that enshrines that separation statewide, prohibiting jails from holding onto immigrants for ICE and barring agreements that delegate immigration enforcement powers to police.

The law allows cooperation when immigrants have committed serious or violent crimes. Immigrant advocates argue that the distinction between immigrants who threaten public safety and those who do not has been lost in the Trump administration’s crackdown, which has resulted in soaring arrests of people not convicted of crimes.

By Jeremy B. White for INDEPENDENT
Read Full Article HERE