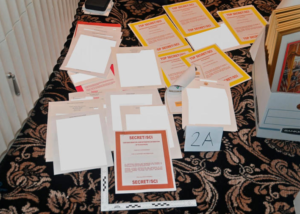 Former president Donald Trump has told the New York judge overseeing a review of documents seized from his Florida property that 15 documents pertaining to pardon requests and immigration policy matters belong to him and should be treated as personal records.

Per a review of the court filings by The Independent, most of the documents at issue pertain to clemency requests made when Mr Trump was still president and had the authority to grant pardons for federal crimes. Two of them are related to his former administration’s immigration policy, and another is a letter from someone who worked at a US service academy.

Mr Trump’s claim of ownership over what would ordinarily be considered government property was revealed in a Department of Justice letter to Judge Raymond Dearie. Mr Dearie is the special master appointed to supervise disputes over whether records seized in the 8 August search of Mr Trump’s Mar-a-Lago home and office can be used in a criminal case by the government.

Citing a 2012 case in which a court found that personal audio diaries recorded by former president Bill Clinton were not presidential records, Mr Trump believes this gives him authority to declare any record created during his presidency to be his personal property.

But the Justice Department, per the court filings, said it rejects his line of reasoning, arguing that the case “does not prove that any of the nine documents were ‘[r]ecord[s] designated [as] personal consistent with the Presidential Records Act’”.

“Neither the district court … nor any other court has suggested that otherwise Presidential records may be rendered personal by fiat. Nor has any court held that Nara would be without authority or recourse if a President were to designate records that are plainly official government documents as personal records,” prosecutors said. “More fundamentally, Plaintiff – who bears the burden of proof – offers no evidence that he in fact designated those nine documents as personal records during his term in office”.

By Andrew Feinberg for The Independent
Read full article HERE