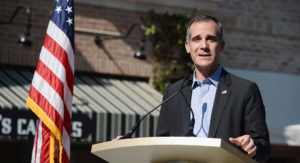 Days earlier, Los Angeles Mayor Eric Garcetti had posted a video informing undocumented residents of their legal rights. Trump blasted back in a Tuesday tweet, “The Mayor’s efforts to shield illegal aliens endangers the lives of the public and law enforcement who have to go into the field to apprehend those released.

“He shouldn’t be urging illegals to beat the system, he should be urging them to safely turn themselves in!” Trump wrote.

Trump threw an elbow at Garcetti as the president prepared to meet Tuesday with officials about Los Angeles’ Olympics bid before heading to a Beverly Hills fundraiser; he’s scheduled Wednesday to talk about agriculture issues with farmers and House Minority Leader Kevin McCarthy in Bakersfield.

Trump has regularly railed against California’s immigration policies. His State of the Union speech reprised that theme, blasting sanctuary policies that partition local law enforcement from federal immigration authorities — a separation that’s the law in Los Angeles and throughout California — and assailing California for offering health care to undocumented immigrants.

The president has repeated those critiques in the days since and the Department of Justice officials have amplified them. Attorney General William Barr and the U.S. attorney for San Diego both warned after Trump’s speech that sanctuary policies were undermining public safety.

The administration has challenged California’s sanctuary laws and threatened to withhold federal funding as a result — reprisals that have so far been blocked in court. Federal officials said last week that they would deploy tactical Border Patrol units to sanctuary cities in California and elsewhere, drawing criticism from Los Angeles officials.

California’s homelessness crisis has also attracted regular criticism from Trump. The president has blasted Garcetti and other elected officials for failing to get a handle on soaring street homelessness even as administration officials work with Los Angeles counterparts. Housing and Urban Development Secretary Ben Carson extended an olive branch during a Los Angeles visit last week, saying the federal government wants to work with California and that the two “are not enemies.”

By JEREMY B. WHITE for POLITICO
Read Full Article HERE