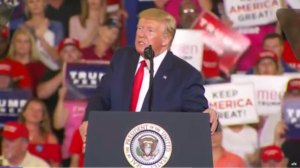 On the eve of a special election in a swing state crucial to his reelection prospects, President Trump traveled to Fayetteville, N.C., Monday and delivered a speech that portrayed illegal immigrants as a threat to America.

“To protect your family, you must defeat open borders. And you have a Democrat named Dan McCready and he wants open borders,” Trump told his audience. “He wants sanctuary cities and he’s not going to protect your Second Amendment.”

McCready, a former Marine and Iraq War veteran, is running for the seat for a second time in a special election on Tuesday, after narrowly losing to Republican Mark Harris in 2018, in an election so tainted by misconduct that Harris’s victory was declared invalid, and he has been replaced as the GOP nominee by Dan Bishop. McCready does support a pathway to citizenship for so-called Dreamers, the children of undocumented immigrants brought to the country by their parents. He does not support open borders, but opposes a bill in the state legislature that would compel North Carolina sheriffs to comply with orders to ICE agents to detain immigrants.

“One of the biggest issues in this election is, in fact, sanctuary cities. McCready supports sanctuary city policies that force prisons and jails to release criminal aliens directly into your neighborhoods,” Trump said.

Trump’s message in North Carolina was reminiscent of the case he made during the 2018 midterm elections, when Democrats trounced Republicans to retake control of the U.S. House of Representatives.

Trump, Bishop said, is “the greatest fighter ever to occupy the White House,” battling attacks from Democrats and the media at every turn.

Bishop’s turn at the microphone was interrupted for several minutes when an audience member near the podium was overcome by the heat.