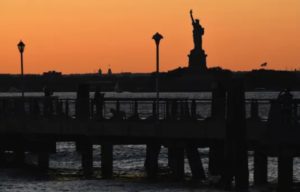 Trump managed to make immigration a voting issue and a defining difference between Republicans and Democrats. But it hasn’t worked out as planned.

Donald Trump came down the escalator at Trump Tower in June 2015, lamented that Mexico sends us its worst, murderers and rapists. His convention speech featured mothers whose loved ones were murdered by illegal immigrants, and he attacked Hillary Clinton for supporting open borders. Later, according to a new book, he proposed moats, alligators, flesh-piercing spikes and shooting immigrants in the legs as they crossed the border.

He succeeded in raising the importance of immigration as a voting issue and defining difference between the parties. But it hasn’t worked out as planned. In fact, it’s quite the opposite.

Some swing white working-class voters shifted to Trump on immigration in 2016, yet the proportion of voters who wanted to create a pathway to citizenship for illegal immigrants went up overall. Then, as president, Trump tried to implement a Muslim travel ban and repeatedly sought to get funding for a border wall to protect from the Central American caravans. How did America respond?

Immigration a 2018 loser for Trump

Trump sent troops to the border, warned of an America exposed without a wall and ran ads showing illegal immigrants who murdered innocent Americans, and yes, he made immigration the most important reason to vote against the Democrats in the off-year elections. His party lost the House in a 53%-45% landslide last year and has lost the battle of public opinion on immigration by much more than that.

In 2019, Trump escalated his battle against immigration by separating children from their parents, creating camps for the pent-up migrants in the United States and Mexico, and ending America’s historic identity as a country that will accept refugees.