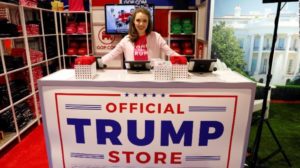 A Trump administration appointee at the United States’ agency responsible for foreign aid has a history of inflammatory rhetoric aimed at refugees, the LGBTQ community and women.

The comments come from Merritt Corrigan, the recently appointed deputy White House liaison at the US Agency for International Development, in tweets in 2019 and 2020. CNN’s KFile reviewed 400 previously unreported tweets from Corrigan’s feed, which were captured by the Internet Archive’s Wayback Machine.

Corrigan previously worked at Hungary’s Embassy in the US where she repeatedly tweeted support for far-right Hungarian Prime Minister Viktor Orban, calling him “the shining champion of Western civilization,” according to ProPublica, which reported on several of Corrigan’s tweets on June 5.

Axios reported Wednesday that USAID employee groups requested to meet with John Barsa, the acting administrator of USAID, over concerns about Corrigan and several other recent appointees. On June 8, Barsa defended Corrigan and two other appointees with a history of anti-LGBTQ and anti-Muslim remarks, saying in a statement articles on their comments were “unwarranted and malicious attacks.”

“I have full confidence that each political appointee at USAID has and will continue to implement the President’s policies and agenda to the best of his or her ability,” Barsa said.

USAID spokesperson Pooja Jhunjhunwala also told Axios on Wednesday: “AA Barsa received this letter on Monday, June 22. He will meet with the Employee Resource Group representatives and plans to continue the conversation on the issues mentioned.”

Jhunjhunwala declined to comment further on Monday and pointed CNN’s KFile to her past statements. In response to ProPublica’s report, she said USAID had a “zero-tolerance policy of any form of discrimination or harassment based on gender, race, sexual orientation, religion or any other possible distinguishing characteristic that can define any of us.”

Corrigan did not respond to multiple CNN requests for comment.

“Mass deportations when?,” Corrigan tweeted in October 2019, linking to a 2010 article in which German Chancellor Angela Merkel said German multiculturalism has failed.