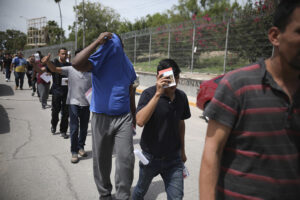 A federal judge presiding over a major legal challenge to President Joe Biden’s immigration policies lashed out Monday at Justice Department attorneys, accusing them of trying to rush him into making a key decision in the case.

U.S. District Judge Drew Tipton castigated federal government lawyers for declaring that they planned to seek emergency relief from an appeals court by 2 p.m. Central Time if he did not rule by then on a request to stay an injunction he issued last week prohibiting the administration from continuing to use immigration enforcement priorities rolled out shortly after Biden’s inauguration in January.

“Whose idea was it to impose a 2 p.m. deadline on the court?” Tipton asked, repeatedly demanding to know who at the Justice Department decided to tell him that they’d go to the 5th Circuit Court of Appeals at that hour if he hadn’t ruled on the stay request.

“This is the view of the United States,” Kirschner said. “I can’t speak to internal deliberations. It shows the urgency that we have and the great irreparable harm posed by the injunction.”

Tipton, an appointee of former President Donald Trump, wasn’t satisfied with that answer.

“Who’s idea was it?” he demanded. “Were you involved in it?”

Kirschner said that as “counsel of record” in the case, he was part of those discussions. But he declined to name others for the judge, saying that would divulge privileged information about the department’s work.

Tipton pointed out that he had scheduled a hearing on the case for 3:15 p.m. Central Time Monday and he said trying to force the court’s hand just before that hour was bad form.