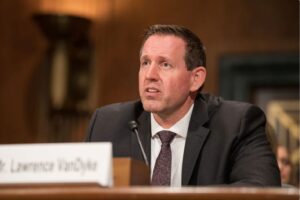 (Reuters) – A conservative judge appointed by former Republican President Donald Trump to the San Francisco-based 9th U.S. Circuit Court of Appeals on Tuesday blasted its immigration rulings as “perpetually embarrassing” as he objected to giving two Indonesians another shot at winning asylum.

U.S. Circuit Judge Lawrence VanDyke’s comments came in a dissent to a 2-1 decision holding the Board of Immigration Appeals failed to assess the risk the couple faced of persecution in majority-Muslim Indonesia given their status as evangelical Christians.

VanDyke, who has become known for stringent dissents since joining the liberal-leaning court in 2020, said he was often “baffled why my colleagues strain to prevent removal in some of the cases that come before us.”

That was particularly so when the individuals had “disturbing” criminal histories, VanDyke said, citing other recent cases.

He said by contrast, “it’s easy to see why one would want to help” the two Indonesians in California, Henri Nababan and Harlena Rose Silalahi. But “following the law and not your heart” is the hard part of judging, he said in arguing BIA’s decision should stand.

“The majority’s unwarranted reversal in this case is the latest specimen of our playing BIA-for-a-day instead of genuinely deferring to the agency’s decisions,” VanDyke wrote.

Howard Davis, a Glendale, California-based lawyer for Nababan and Silalahi, and the U.S. Justice Department, which oversees the BIA, did not respond to requests for comment.

The decision was the latest development in years of asylum proceedings beginning in 2003. Nababan and Silalahi, married Seventh Day Adventist Church members, remained in the United States without permission after entering the country on temporary visas.

The appeal stemmed from the BIA’s 2018 rejection of their request to reopen their case based on changed conditions in Indonesia.

They cited an “eruption” of attacks against Christians starting in 2016 and said their recently attained church leadership positions as deacons exposed them to heightened danger.