Home Politics Trump and Stephen Miller are Now Targeting Legal Immigrants. This Will Get Uglier. 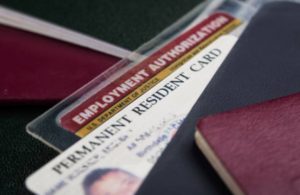 Republicans become deeply offended when you suggest that their party is in the process of adopting a white nationalist agenda, and that many of their voters are motivated by xenophobia. No no, they say, we acknowledge that America is a nation of immigrants; we just want a secure border and all the laws to be enforced. We welcome legal immigrants; it’s illegal immigration we have a problem with.

But then you get something like this, as reported by NBC’s Julia Ainsley:

The Trump administration is expected to issue a proposal in coming weeks that would make it harder for legal immigrants to become citizens or get green cards if they have ever used a range of popular public welfare programs, including Obamacare, four sources with knowledge of the plan told NBC News.

The move, which would not need Congressional approval, is part of White House senior adviser Stephen Miller’s plan to limit the number of migrants who obtain legal status in the U.S. each year.

Details of the rulemaking proposal are still being finalized, but based on a recent draft seen last week and described to NBC News, immigrants living legally in the U.S. who have ever used or whose household members have ever used Obamacare, children’s health insurance, food stamps and other benefits could be hindered from obtaining legal status in the U.S.

So much for the idea that Republicans only want to eliminate illegal immigration. Donald Trump — who, let’s not forget, got elected by saying he’d ban Muslims from entering the country and build a wall on our southern border — is following through on his vision, and that of people like Stephen Miller, that America should no longer welcome immigrants, and kick out as many of those who are already here as they can.

As Ainsley reports, the administration has drastically reduced the number of green cards they grant and the number of green card holders who are granted citizenship. They’ve also tried to cut legal immigration levels, taken steps to all but shut America’s doors to asylum-seekers, unleashed ICE to pursue people for deportation who have been living lawfully in the U.S. for decades, and of course enacted the horrific family separation policy at the border, with the explicit intent of deterring people from trying to come to America lest their children be ripped from their arms.