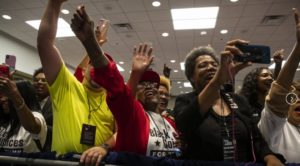 President Donald Trump is trying to pit the black community against immigrants, saying Democrats care more for people who have come to the U.S. illegally than African Americans.

Trump says public benefits should be protected for American citizens and says today’s Democratic Party has no idea how to help black Americans.

Trump is trying to generate black support during a campaign event in Atlanta to launch a black voters coalition.

Trump is turning several of his hot-button issues into a play for black support.

For example, he says Democrats would rather not pass a proposed trade agreement with Canada and Mexico because Democrats “would rather hurt their political opponents than help their black constituents.”

President Donald Trump is trying to appeal to African American voters by citing crime problems in the nation’s major cities, saying the vast majority of the nation’s most dangerous cities are run by Democrats.

Trump is speaking to black voters in Atlanta as his campaign begins a “Black Voices for Trump” coalition.

He says of the support blacks have traditionally given the Democratic Party, “it’s amazing that you’ve stayed so long, to be honest.”

Trump says that under his presidency, wages are rising for blacks and that they’re rising the fastest for the lowest-income workers.

Housing and Urban Development Secretary Ben Carson is encouraging black voters in Georgia to get out and talk to their family and friends in support of President Donald Trump, saying he helped get criminal justice reform passed.

Carson is speaking at a “Black Voices for Trump” rally in Atlanta as the Trump campaign tries to ramp up support from a traditionally skeptical audience when it comes to the Republican Party.

Carson says Trump doesn’t believe in identify politics and that if he’s a racist, “he’s an awfully bad one.”

A few hundred black supporters are attending the event. Vice President Mike Pence is telling the crowd that Republicans, from Abraham Lincoln to Dwight Eisenhower, have a history of looking out for African Americans.