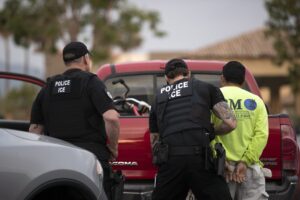 The agreements say Arizona, Indiana, Louisiana, and Texas are entitled to a 180-day consultation period before executive branch policy changes take effect. The Biden administration rejects that argument on grounds that immigration is solely the federal government’s responsibility under the Constitution.

Former President Donald Trump relied heavily on executive powers for his immigration agenda because he was unable to build enough support for his policies in Congress. Now some of his supporters say Biden is going too far in doing the same to reverse them.

The first legal test is in Texas, where the Republican governor and attorney general are challenging the Democratic president’s 100-day moratorium on deportations, which took effect Friday.

The Homeland Security Department told lawmakers shortly before Biden’s inauguration last week that it reached nine agreements, mostly with states, according to a congressional official speaking on condition of anonymity to discuss information that is not yet publicly available.

The department declined to comment, citing the lawsuit. The Trump administration, usually eager to trumpet immigration enforcement, stayed publicly quiet on the agreements, which were first reported by BuzzFeed News.

The nine-page agreements known as Sanctuary for Americans First Enactment, or SAFE, are expansive. They require that state and local governments get 180 days’ notice of changes in the number of immigration agents, the number of people released from immigration custody, enforcement priorities, asylum criteria, and who qualifies for legal status.