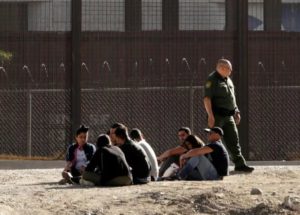 Nearly eight months after US president Donald Trump issued an edict to “restore integrity” to the American immigration system, authorities are attempting to make it more difficult for asylum seekers to earn a living.

Presently, asylum seekers can apply for a work permit 150 days after requesting asylum, and permission can be granted 30 days after that. In an announcement last week, the US Department of Homeland Security (DHS) said it now plans to double that wait to a full year. Asylum requests can often take years to be granted.

The proposed change, if enacted, would affect approximately 300,000 people each year. A separate proposal would raise the fee for a work permit application from $0 to $490. Unlike many signatories to the UN’s 1951 Refugee Convention, the United States does not provide those requesting asylum with a monthly subsistence allowance. Germany, by comparison, provides asylum seekers with about $400 a month for living expenses while their cases are processed.

Maureen Dunn, the chief of DHS’s Division of Humanitarian Affairs, did not respond to a request for comment.

The plan follows a Trump administration bid to exclude immigrants from entering the United States who it believes might later need public assistance, and comes on the heels of a White House scheme to make asylum seekers pay steep processing fees, which would make the United States one of only four countries—Fiji, Iran, and Australia—to do so. Trump himself has complained about those fleeing persecution or violence at home making “fraudulent or meritless asylum claims to gain entry into our great country.” Immigration advocates say this portrayal is not only inaccurate but immoral, and that the administration is simply trying to make the lives of asylum seekers as difficult as possible.

“The proposal is part and parcel of this administration’s efforts to block as many immigrants as possible from coming to the US, even if they have—like asylum seekers [do]—the legal right to do so,” Susan Collins, director of policy and advocacy at the nonprofit National Partnership for New Americans, told Quartz. “As long as people and their children are in danger, they will seek refuge in the United States because they have no choice. And if you deny people the ability to work to support themselves and their families, you increase the suffering of already traumatized people, place a strain on state and local communities to fill the gap, and force people underground to work in exploitative situations without a permit just to buy food and pay rent.”