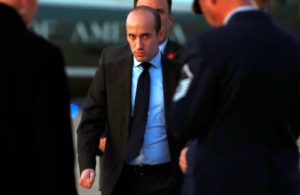 WASHINGTON — Under the cloak of a pandemic and the convulsions of anti-racist protests, the Trump administration continues to advance its policies to restrict legal immigration, halting the flow of foreign workers and raising the bar for asylum seekers hoping for sanctuary.

This week, administration officials proposed a fallback for when they need to lift “emergency” border closure rules for the coronavirus, proposing regulations that would raise the standard of proof for migrants hoping to obtain asylum and allow immigration judges to deny applications for protection without giving migrants an opportunity to testify in court.

If adopted, the rules would lay a framework of restrictionist immigration policies that can be enforced well after the pandemic subsides. The administration last month extended a coronavirus border rule that has effectively blocked nearly 43,000 migrants from seeking asylum at the southwest border, according to Customs and Border Protection data released on Friday. In April, President Trump issued an executive order temporarily suspending the issuance of green cards to many outside the United States and is expected to limit certain visas issued to immigrants seeking temporary work in the country.

And the administration is examining restrictions on new skilled-worker H-1B visas in the coming weeks.

“You’re going to see some more news on that probably sometime soon,” Kenneth T. Cuccinelli II, the acting deputy secretary of the Department of Homeland Security, said Wednesday at an event organized by the Heritage Foundation when asked about nonimmigrant visas.

In the past month, top administration officials, including Stephen Miller, a senior White House adviser and an architect of Mr. Trump’s hard-line immigration agenda, have discussed ways to follow up on the executive order in April.