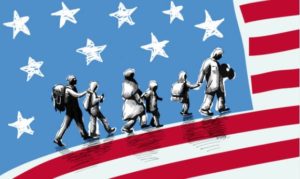 The Trump administration announced a fundamental change to the United States’ immigration rules on Monday, ending asylum protections for virtually all immigrants seeking asylum at the U.S. southern border.

Ali Noorani, executive director of the National Immigration Forum, joined Boston Public Radio on Tuesday to discuss this new rule and the consequences it will have for people fleeing Central America.

“What the administration did yesterday, and the proposed rule that they announced that will go into effect today unless it’s enjoined by a court, is that the administration would require anybody who has entered or seeking asylum at our border to have first applied for and been rejected for asylum in a transit nation,” Noorani said.

A person will not be able to apply for asylum in the U.S. unless they’ve first applied for asylum in another country they’re migrating through, Noorani said.

Noorani explained that the motive behind this new rule is to send an isolationist message abroad.

“This isn’t really about policy for this administration. This is about a message that the president wants to send to the rest of the world, that we as the United States don’t care about anybody else, and if you’re fleeing violence, persecution, we don’t want you in the U.S.,” Noorani said.

Noorani’s latest book is “There Goes the Neighborhood: How Communities Overcome Prejudice and Meet the Challenge of American Immigration.”