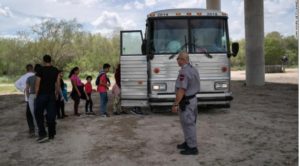 Washington (CNN) – The Supreme Court’s order Wednesday allowing new asylum restrictions to go into effect marks a significant win for President Donald Trump, who’s faced several legal challenges in his attempt to implement a hard-line immigration agenda — and could embolden him on other related issues, such as the upcoming refugee ceiling.

The administration has rolled out policies aiming to curb the flow of migrants coming to the US-Mexico border following a steep uptick in border arrests in recent months. Wednesday’s decision allows the administration to move forward with a rule that limits asylum for some and in effect, send thousands of Central American migrants back to Mexico to apply for asylum.

Less than 24 hours after the Supreme Court’s order, acting US Citizenship and Immigration Services Director Ken Cuccinelli reflected on the slew of lawsuits that have challenged the administration’s policies during an interview with Axios’ Mike Allen Thursday morning, saying that it’s “sort of a joke in the office” when a policy will get sued following its rollout.

When pressed by Allen on why the administration pushes forward policies it knows it’ll get sued for, Cuccinelli quipped, “because we’re right.”

“One, we’re implementing the President’s policies. He’s made it very clear from day one, frankly before day one, when he was campaigning, that he intended to be forceful and aggressive in this space from a policy standpoint,” Cuccinelli said.

Over the course of the year, the Department of Homeland Security has moved to expand the so-called “remain in Mexico” policy that requires some asylum seekers to wait in Mexico for the duration of their immigration proceedings. That program is also being challenged in court but has been allowed to remain in effect for now.

The Supreme Court’s order Wednesday was related to a rule, from the Departments of Justice and Homeland Security, prohibiting migrants who have resided in or traveled through third countries from seeking asylum in the US, therefore barring people traveling through Mexico from being able to claim asylum.