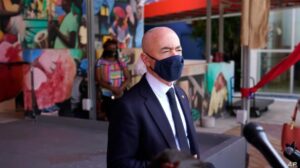 Rose Tilus was 17 when her family sent her from Haiti to live with a relative in Florida. Tilus’ parents feared for her safety because of political and civil unrest in Haiti at the time. She left behind four siblings.

Today, Tilus still lives in fear. But this time it revolves around her immigration status in the United States.

“My day-to-day thinking is, ‘What if I’m deported? What if I’m sent back?’ So that’s always in the back of my head. What would I do?” Tilus said.

Tilus is among more than 300,000 foreign nationals living in the U.S. who have Temporary Protected Status (TPS). The designation allows Haitians and those of 11 other nations who meet certain requirements to be shielded from deportation and obtain a work permit. It does not, however, give them a path to permanent residency and U.S. citizenship.

By definition, TPS was designed as a temporary humanitarian protection. As then-Homeland Security Secretary John Kelly noted in 2017, “TPS as enacted in law is inherently temporary in nature, and beneficiaries should plan accordingly that this status may finally end.”

But for many, that status has been extended and renewed repeatedly, during which time lives have been built in the United States. In Tilus’ case, she has become a nurse, serving on the front lines against the coronavirus pandemic, and earned a master’s degree.

After more than a decade of living renewal-to-renewal under different U.S. administrations, Tilus told VOA she feels like she is stuck in a hole “unable to come up.”

For many TPS holders, hopes of a path to U.S. citizenship were dashed Monday when the U.S. Supreme Court ruled that certain immigrants with TPS cannot get green cards, or permanent residency, in the United States.

The court’s unanimous decision affects those who entered the United States unlawfully and without inspection.