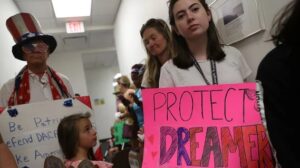 The National Association of Manufacturers (NAM) is renewing calls for Congress to pass legislation that would protect “Dreamers” and immigrants participating in the temporary protected status (TPS) program.

The trade group, along with more than 30 manufacturing and local business associations, sent a letter to senators on Wednesday urging them to provide certainty as an “important first step” toward a larger immigration overhaul.

“These individuals have been pursuing the American Dream for years, but conflicting administrative actions and unpredictable court decisions continue to make their futures uncertain,” the letter reads. “Congress needs to send a strong signal that we welcome their talents, hard work, desire for education, and if serving, their willingness to wear the uniform of the American armed forces.”

The letter comes as immigration legislation has stalled in the Senate. In March, the House passed the Dream and Promise Act, which would protect Dreamers and TPS holders and allow them to apply for citizenship. But Senate Republicans aren’t biting on the measure, and Democrats are focused on their infrastructure proposal.

Stephanie Hall, director of innovation policy at the NAM, said the organization is hopeful it can win Republican support in the Senate for the bill. Hall noted that a wide range of business interests support the measure, and nine House Republicans backed the legislation in March.

“We view this area that just needs a push to remind everyone that clear solutions exist and that it is possible to find bipartisan agreement on this,” Hall said.

NAM and other business groups such as the U.S. Chamber of Commerce and the Business Roundtable have long supported similar measures to provide a pathway to citizenship for certain undocumented immigrants. The Chamber endorsed the House bill and the Dream Act, which was introduced by Sens. Dick Durbin (D-Ill.) and Lindsey Graham (R-S.C.).

By Karl Evers for THE HILL
Read Full Article HERE