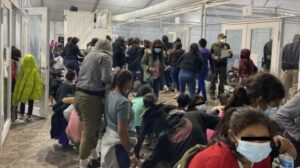 The Biden team’s top border officials defended the administration’s policies before lawmakers Thursday as each party sought to pin blame on the other for the rising numbers at the Southwest border.

But they also defended holding over policies that allow quick deportations in the name of COVID-19 as well as agreements with local law enforcement agencies.

“They did nothing to facilitate addressing the surge. What they did was they dismantled the tools that we had to address it and they tore down the programs that could have helped alleviate the pressure,” Mayorkas told the Senate Homeland Security and Governmental Affairs Committee, pointing the finger at the Trump administration.

“It was antithetical to not only our values and our principles, but also our operational needs.”

In an appearance before the House Appropriations Committee, however, Johnson defended a number of policies advocates have urged the Biden administration to scrap — including those Biden promised during the campaign to repeal.

Top of the list is the CDC’s so-called Title 42 rule, promulgated under Trump, which the Biden administration has relied on extensively to deport single adults and even families who seek to cross the border. Biden has exempted unaccompanied children from the rule, following a late 2020 ruling barring its use on minors.

“ICE is concerned that the loss of Title 42 could create additional pressure on our immigration system,” Johnson said, nodding to litigation from the American Civil Liberties Association. He called the rule “critical” to maintaining social distance in border facilities.

“I don’t think it’s a situation where it’s going to just be lifted electively. We would be mandated by some sort of court order to lift it,” he added later.