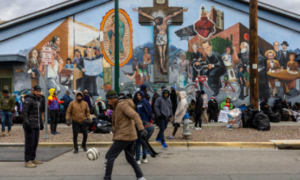 Title 42, the pandemic-era protocol that prevented millions of migrants from entering the US to claim asylum, is slated to end on December 21. The policy, initially enacted under former President Donald Trump allegedly to slow the inflow of coronavirus into the US, has become a tool for Republicans to continue imposing immigration restrictions.

Title 42 is a public health authority, not an immigration policy; however, Republican-led states have been attempting to keep it in place due to its effectiveness in curbing immigration particularly at the southern border. The end of the policy, nearly three years after it was implemented in March of 2020, will mean an influx of people that the government isn’t well-equipped to serve, as well as a reignited debate over how to deal with the nation’s broken immigration policy.

President Joe Biden’s administration tried to end the policy this past April, but a Louisiana judge ruled in May that proper administrative protocol must be followed to formally lift the program. Republican-led states again tried to intervene via the courts in an attempt to keep it in place, but a federal appeals court ruled Friday the policy must end Wednesday. There is still the possibility that the Supreme Court will intervene before then, as those GOP-led states indicated they would appeal their case to the highest court, according to the Washington Post.

Critics of the policy say that it has cost nearly 2.5 million migrants their legal right to come to the US to seek asylum from conditions in their home countries, including violence and natural disaster in Haiti, political repression in Cuba, and desperate economic hardship in Venezuela. Proponents — primarily Republicans, but at times also the Biden administration — have fought attempts to rescind the policy in court successfully up till now, making Title 42 an enduring part of US immigration protocol despite its supposedly contingent and specific application.