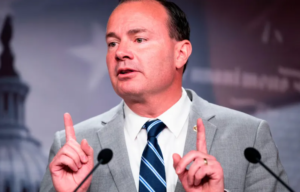 Democrats looking to quickly pass a $1.7 trillion spending bill stumbled Wednesday night as the fight over whether to ease immigration rules spilled out onto the Senate floor.

Republicans and Democrats had been negotiating a trade-off that allowed some votes on amendments to the huge spending bill, in return for GOP agreement to allow an earlier vote on the bill.

One of those amendments was proposed by Sen. Mike Lee, R-Utah, to maintain the Title 42 policy under which millions of immigrants have been turned away at the border to limit the spread of COVID-19. That policy is expected to be phased out any day now, which has Republicans, border states and others worried that the immigration crisis could become even worse.

Late Wednesday, Senate Republicans accused Democrats of refusing to allow a vote on Lee’s amendment and allowing it to be attached with a simple-majority vote. Lee said he thinks Democrats are worried it would pass under those conditions.

“Title 42 authority is the only thing standing between us and absolute pandemonium on the border,” Lee told Fox News. “The Democrats won’t let us do it. Why? Because they’re afraid it might pass.”

“It is outrageous that Senate Democrats are refusing to allow a vote on @SenMikeLee amendment to extend Title 42 expulsion authority,” tweeted Sen. Lindsey Graham. The South Carolina Republican said he supports the omnibus spending bill, “but not at all costs.”

“If the omnibus – which dramatically increases military spending and funds the government – fails because Democrats care more about letting Title 42 lapse than funding the federal government, so be it,” he tweeted. “If this bill fails because Senator Lee was not allowed a vote on extending Title 42, it will be one of the lowest points in the history of the United States Senate.”