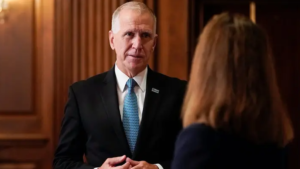 Sen. Thom Tillis’, R-N.C., office on Wednesday downplayed the possibility of a bipartisan immigration deal until the Biden administration moves to secure the border — saying there was “not much to negotiate” until that occurs.

Sen. Dick Durbin, D-Ill., had said in an interview that talks between him and Tillis had restarted on a potential immigration deal as the two traveled through Europe.

He had expressed hope that the recent deaths of more than 50 migrants in a tractor-trailer in Texas would spark a deal in the same way the recent mass shooting in Uvalde had led to a bipartisan gun control deal.

“We’ve been talking the last couple days about reviving that effort,” Durbin told Politico. “And I think what happened at the border with finding 51 dead migrants in that tractor trailer is what I would call a ‘Uvalde moment.’ I hope it sparks an interest in finding a bipartisan approach to dealing with immigration.”

However, in response to a query from Fox News Digital, Tillis’ office downplayed the scope of prior talks, and also said that there was little to talk about when there is an ongoing migrant crisis at the southern border.

“A group of senators previously held discussions that were exclusively focused on border security and stopping the abuse of our nation’s asylum laws,” Tillis’ office said. “However, until the Biden-Harris administration starts to enforce immigration laws and finally takes some action to end the crisis at the border that they created, there is not much to negotiate.”

“Leaders in Washington have to act in the best interest of the American people and American workers,” his office said.

A bipartisan immigration deal has evaded senators for years. Democrats and the Biden administration last year introduced a sweeping reform effort that would expand visas and grant mass amnesty to millions of illegal immigrants — but that contained little border security to tempt Republicans.