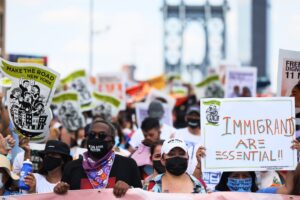 The House Judiciary Committee late Monday advanced, by a 25-19 party line vote, a sweeping proposal that creates a pathway to citizenship for millions of undocumented immigrants. The language—which must still pass the Senate, and also awaits an entirely non-binding opinion from the chamber’s parliamentarian—is the most significant immigration proposal to pass the committee in years, advocates said.

“We are long overdue for transformative immigration reform that legalizes millions of people and it is a moral failure that today, in America, millions of immigrant workers are considered ‘essential’ and ‘deportable,’” We Are Home Campaign Director Bridgette Gomez said in a statement received by Daily Kos. “We can do better and we can’t wait any longer.”

Advocates noted that House Judiciary Democrats successfully beat back poison pill amendments put forward by Republicans, including an anti-Afghan refugee proposal and “an anti-abortion amendment that has nothing to do with immigration to the immigration bill markup,” immigration attorney Greg Siskind tweeted. Republicans know that, of course. The purpose is to derail this process with delays and frustration.

Thankfully, their strategy didn’t work. ”Vote-a-rama on the Republican anti-immigration amendments continues and the Democrats are holding firm and rejecting them all,” Siskind tweeted during the amendment process.

The language passed by House Democrats could protect up to eight million undocumented immigrants, Bloomberg reported. “The bill would provide a path to permanent status (a green card) for four separate groups of people: (1) those who came to the United States as children, (2) those who have worked as essential workers since January 1, 2020, (3) those who had Temporary Protected Status in January 2017, and (4) those who were eligible for Deferred Enforced Departure on January 20, 2021,” Aaron Reichlin-Melnick writes in Immigration Impact.

Reichlin-Melnick notes other provisions passed by House Democrats “could significantly reduce visa backlogs and would represent the most significant changes to the U.S. legal immigration system in 30 years.”