Home Resources This Immigrant Is Working Hard And Saving Money, But Desperately Misses His Home 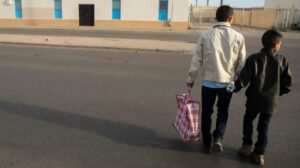 Two of Carlos Joaquin’s children are in Guatemala, where he has financed the building of a new home for his family by sending money back from the U.S.

Carlos Joaquin can’t remember a time he worked so hard, nor a time he longed for home so much. After two years in North Texas waiting for his day in court to argue his case for asylum in the U.S., home beckons.

He aches for his family so badly that he’s considering paying a smuggler to bring his two children, ages 8 and 9, north from his native Guatemala to be reunited with him. Otherwise, he will have to go back. But if he leaves, he knows he’ll miss in North Texas what he’ll never have back in Guatemala: work and more work. Money to support a family.

He’s at a breaking point. Torn to pieces, he said.

“My family needs me,” he said recently over chicken tacos and a bottled Coke. “But my friends here tell me to hold on because the economy is about to boom; that I should just pay a coyote to bring my children and reunite with them because I may not be going home, not for a while.”

It has been more than two years since the small, wiry farmer made the difficult decision to leave all he ever knew and had, including his wife, children, land, cattle and chickens. He says he left Guatemala to seek asylum and start a new life, away from extortions and gang violence. He brought with him his eldest son, Fernando, who had just turned 11.

Carlos Joaquin agreed to check in regularly with The Dallas Morning News in an effort to document his experiences as an asylum-seeker and help readers gain a better understanding of the life of an unauthorized immigrant navigating a country full of opportunities and myriad contradictions.