Home Politics They Were Deported By Trump. Now Biden Wants To Bring Them Back 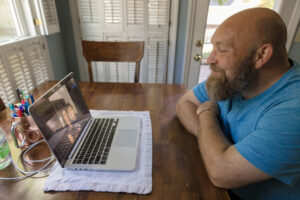 The Biden administration will review thousands of deportations, permitting some immigrants back into the U.S.

Jason Rochester tried everything he could to persuade the Trump administration to allow his wife Cecilia, who is Mexican, to come back to their home in the United States.

A truck driver from Georgia, Rochester wanted to fix his wife’s undocumented immigration status and put her on track to become an American citizen, like him and their son Ashton, now 8. They even agreed that she would leave for Mexico voluntarily in 2018, expecting she would soon be permitted to re-enter the country with legal papers.They were wrong. Even when Ashton went through a year of treatment for kidney cancer, Trump administration officials did not relent, finding no compelling reason to let his mother in. Rochester stopped pleading.

Now, based on encouraging moves by President Joe Biden in a handful of deportations, Rochester is preparing a new application to try again.

That’s because the Biden administration, with little public fanfare, is working on plans for an organized review of thousands of cases of people who say they were unjustly deported in recent years, senior officials in charge of immigration said.

The officials say that many deportations, especially under Trump, were unduly harsh, with little law enforcement benefit. They are working to devise a system to reconsider cases of immigrants who were removed despite strong ties to the United States.

Legal scholars said a process that resulted in returns of significant numbers of deported people would be highly unusual in American immigration law. Until now, undoing deportations has generally required arduous legal battles in exceptional cases, and returns have been infrequent.