Home Court News ‘They Need To Move Quickly’: A Texas DACA Case Could Force Congress To Move On Immigration 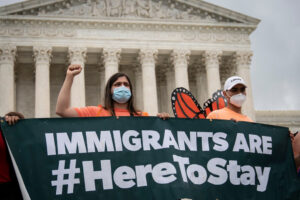 The judge is likely to overturn DACA protections for more than 640,000 undocumented young people.

The Biden administration and Democrats on Capitol Hill have vowed repeatedly to secure a pathway to citizenship for millions of undocumented immigrants. But a federal judge in Texas could be the one to force them to take the first step in making it happen.

Advocates, attorneys and lawmakers expect a ruling within days — or weeks — on a court case that will determine the fate of the Deferred Action for Childhood Arrivals program, which provides protections for more than 640,000 immigrants brought to the country illegally as children.

Many anticipate that DACA will be ruled unlawful, given the Trump administration’s handling of the case and the judge’s track record on immigration. It would be the latest blow to the program, which has been caught in legal limbo since former President Barack Obama introduced it in 2012.

Still, despite its legal challenges, DACA remains popular, with widespread support among both Republicans and Democrats, who believe so-called Dreamers should be shielded from deportation and given legal status. But if DACA is overturned, recipients will be stripped of their protection from deportation and work permits. And that could pressure Congress to offer permanent legal status for Dreamers — and potentially other undocumented immigrants.

“The times where Congress [has been] most energized to move was when they felt they were in the middle of a crisis moment,” said Alida Garcia, vice president for advocacy at FWD.us, an immigration advocacy group.

But Garcia said she is “scared” because “we’ve gone through so many crisis moments on DACA that people have a bit of fatigue.” Congress doesn’t seem to get that — right now, the program is facing its greatest risk, she said.

“They need to move quickly,” she said.