Home Resources These TV shows are changing the way we see immigrants, a new study finds 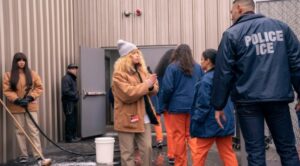 “Ms. Casillas, do you and your brother have a lawyer?” the judge asks.

The little girl shakes her head.

“Do you know what a lawyer is?” the judge replies.

“No,” the little girl whispers.

“Well, do you understand that we are here to determine whether or not you two can remain in the United States?”

“Can I use the bathroom?” the girls asks, clutching her little brother’s hand.

This scene, from the final season of Netflix’s “Orange Is the New Black,” was included in the “Change the Narrative, Change the World” study released Wednesday by the nonprofit media and culture organization Define American in partnership with the Norman Lear Center, which researches and evaluates media at the USC Annenberg School for Communication and Journalism.

The new study found that TV shows with immigrant characters — such as “Ramy,” “One Day at a Time” and “How to Get Away With Murder” — are inspiring viewers to take real-life action.

Researchers looked at how three key immigration storylines from “Orange Is the New Black,” “Madam Secretary” and “Superstore” changed viewers’ understanding of and attitudes toward immigrants.

For Nico Santos, who plays sales associate Mateo Liwanag on “Superstore,” that perception — especially of the immigrants who have entered the country illegally or overstayed their visas — matters.

“For me, as a Filipino immigrant, I know — a lot of members of my family, or close friends, people in my immediate circle — we all know somebody who is undocumented. It’s part of the immigrant experience,” Santos told The Times.

“If you’re an immigrant, you’re going to know somebody who’s undocumented, whether it’s you personally, somebody in your own family, a close friend or a friend of a friend,” Santos said. “It’s just part of how we come to be.”