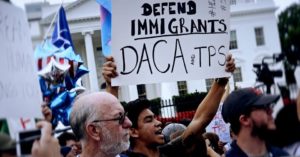 Unless you’ve been completely disconnected from reality, you likely know that this year is a presidential election year. Both Donald Trump and candidates for the Democratic primary have been touring their policy positions ahead of the election and regardless of who ends up in the White House, there will be serious changes to the United States’ immigration policies.

Even before the November election, we can expect major policy changes under the Trump Administration. And given the president’s previous stance on immigration, we shouldn’t expect him to stand before the Statue Of Liberty and tout the USA as a beacon of hope for migrants and its tradition as a nation of migrants. But here’s what we should expect in the new year:

On November 12, 2019, the Supreme Court heard a challenge to the Trump administration’s decision to end the Deferred Action for Childhood Arrivals (DACA) program, which currently grants work authorization and administrative relief from deportation for up to 700,000 individuals who came to America before the age of 16. If the Supreme Court rules in favor of the administration, then talk of a legislative compromise will increase. However, the closer it gets to the November 2020 presidential election, the less likely a deal may become.

A November 1, 2019, Federal Register notice automatically extended “the validity of TPS-related documentation for beneficiaries under the TPS designations for Sudan, Nicaragua, Haiti and El Salvador through Jan. 4, 2021.” However, a decision in the case of Ramos v. Nielsen, which blocked the Trump administration’s attempt to rescind Temporary Protected Status for several countries, could end long-term stays in the United States for approximately 300,000 people.

In September 2019, the Trump administration announced a historically low annual refugee admission ceiling of 18,000 for FY 2020, a reduction of 84% from the 110,000-limit set during the last year of the Obama administration. “The administration betrays our national commitment to offering refuge and religious freedom to persecuted Christians and other religious minorities,” said World Relief in a statement. There is no reason to anticipate the administration will raise the refugee ceiling for FY 2021.