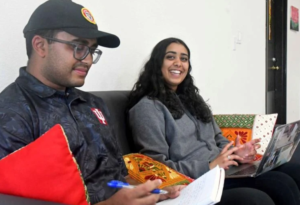 But a flaw in this country’s immigration laws has left roughly 250,000 immigrants faced with the prospect of leaving the only home they’ve ever known.

At a news conference last month, California Democratic Sen. Alex Padilla touted his bill to permanently protect these immigrants who grew up in the United States as dependents on their parents’ temporary visas, were educated here but aged out of that dependent status.

“For these young people, turning 21 means facing an impossible choice,” Padilla said. “Either to leave your family and self-deport to a country that you barely remember, or to stay in the United States living, undocumented, in the shadows.”

Among the documented Dreamers this legislation would protect, by giving them a path to citizenship, are Khushi and Lay Patel, whose family moved to the Hoosier state from Canada in 2012 so their parents — originally from India — could work.

The siblings are still in America via student visas, but Lay, 21, is a senior at Indiana University and planning to study for an extra semester in the fall in an effort to find a way to stay in the country he calls home. Khushi is also studying at IU, and she’s hoping to get a job in Indiana to stay here as well.