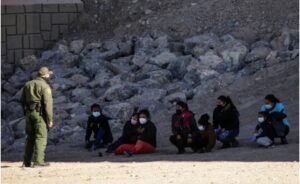 After days of confusion about changes along the southern border, the Biden administration on Wednesday said immigrants should not try to enter the US because most will still be turned away under a Trump-era policy that has recently come under legal scrutiny.

Since March, border officials have used a section of the public health code known as Title 42 to immediately turn back immigrants at the border in order to halt the spread of the coronavirus. It was a massive shift in how the US treated immigrants and effectively sealed off the border to asylum-seekers.

Despite hopes among activists that President Joe Biden would change course, White House press secretary Jen Psaki on Wednesday told reporters that “the vast majority” of immigrants will continue to be expelled at the border.

“Now is not the time to come,” Psaki said. “There have been incredibly narrow and limited circumstances where individuals have come into the country awaiting for their hearing, but the vast majority have been turned away.”

Confusion about who was being allowed into the US in recent days forced the administration to issue a stronger warning. Last week, reports of some families being allowed into the US after being apprehended at the border resulted in speculation that immigrants would no longer be immediately expelled and instead be allowed to fight their immigration cases from within the United States. In the Rio Grande Valley in South Texas, immigration advocates have reported seeing about 100 people a day released by Customs and Border Protection. In other parts of Texas, shelters have also seen increasing numbers of immigrant families, but it is not clear why.

Attorneys and advocates who work with immigrants along the border have been bombarded with phone calls and texts about whether they should try their luck at getting into the US. Erika Pinheiro, policy and litigation director with the immigrant advocacy group Al Otro Lado, said it was “incredibly disappointing” that the Biden administration has continued to expel immigrants under the CDC order.