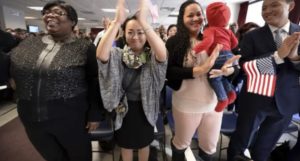 In mid-April, as the country faced a pandemic that had caused US Citizenship and Immigration Services to close its offices to the public, employees at the agency that issues visas and assess asylum claims began to wonder: How would they stay afloat if fewer people applied for immigration benefits and paid the fees that sustain them?

The agency response, from an internal document provided to asylum officers and obtained by BuzzFeed News, was reassuring: “USCIS does not anticipate experiencing a problem with continuing operations and paying employees in the event of reduced fee collection.”

But on Friday, Joseph Edlow, the acting head of USCIS, signaled in an email sent to staff that the coronavirus pandemic had put the agency in a financial crisis that could be disastrous: USCIS “will exhaust its funding this summer, and without congressional intervention, we risk not being able to make payroll and will have to take drastic actions to keep the agency afloat,” he wrote. The agency was requesting $1.2 billion from Congress to keep it going after seeing a serious drop in applications and fees since March.

So far, the White House has yet to officially ask for the funding, raising questions as to whether it will back the request, according to a source with knowledge of the matter.

The agency’s place in the immigration system is integral: USCIS officers provide work permits, conduct initial asylum screenings that determine whether immigrants can make their case for protection in the US, and issue green cards and naturalizations, among other tasks.

USCIS has, however, undergone a radical transformation under the Trump administration as its officers have been forced to implement policies that have restricted asylum at the southern border and made it tougher to apply for certain visas.

Nine USCIS employees told BuzzFeed News they feared that the downturn in funding could be disastrous. They worry that their jobs will be cut and, as a result, there will be a major decline in the number of immigrants obtaining key benefits, like visas, citizenship, and asylum.

“Agency leadership blaming this on the pandemic instead of horrible mismanagement and misguided policy priorities is insulting. The goal of the administration since the start has been to reduce all immigration, not just illegal,” said one USCIS officer. “This is just furthering that goal along. Reducing legal immigration. If we can’t process green cards and naturalize people, even for a short period of time, the effects will be felt for years. It’s really broad.”