Home FEATURED BLOG POSTS THE TRUTH ABOUT SNAP: SELF-SUFFICIENCY IS NOT AN AMERICAN PRACTICE 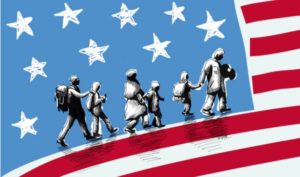 This past week the U.S. Supreme Court lifted the injunction preventing USCIS from implementing a new public charge rule, that would penalize immigrants eligible and participating, on state levels, in any public aid program from getting their green cards. For example, if a person once lived in subsidized housing he will be denied the green card he or she was otherwise eligible for. This is also true if he or she ever used food stamps or SNAP. This new policy is fueled by a mythical notion that “Americans are self-sufficient.” Do we really practice what we preach? What are the facts? You may be surprised.

Let us be honest, there is a little bit of racial bias in these assumptions on who is participating in public aid programs. We certainly know the current White House policy is based on racist views. Now, the Supreme Court is allowing our government to implement racially charged policies in the name of preserving the “all-American” myth of self-reliance. For a nation coddled by the helping hands of native Americans in Plymouth rock and nursed on the free labor of abducted Africans on its farms, this is disappointing. As Americans, we can and must do better.

Let us pause as we enter Black History month, remembering where we came from, to think about where we are going. This November is an opportunity to reset our course. Make your vote count.