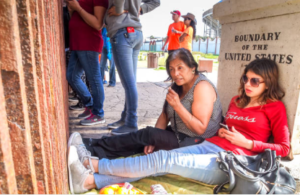 The Trump administration is pushing a proposal to drastically increase fees for immigrants appealing deportation cases or legally attempting to get judges to reconsider their claims in court, according to a draft regulation obtained by BuzzFeed News.

The increase in fees, if instituted, could lead to a substantial shift in how and whether immigrants appeal judges’ decisions in deportation cases. It would also raise due process issues that will likely be challenged by advocates.

In a draft Department of Justice regulation obtained by BuzzFeed News, officials have proposed that immigrants pay $975 to request an appeal of an immigration judge’s ruling and $895 to request a case be reopened or reconsidered with the Board of Immigration Appeals. Proposed regulations are not immediately enacted and require a 60-day comment period.

Currently, the fee to apply for each of these requests is $110.

Such a jump in application prices would represent the latest attempt by the Trump administration to alter the immigration system. Experts believe, if enacted, the increases will impact certain immigrants’ very ability to obtain legal status and protections.

“They are essentially depriving people of the right to appeal — that is big money. It’s a substantial increase of fees that’s beyond the reach of people,” said Rebecca Jamil, a former immigration judge in San Francisco.

A spokesperson for the Executive Office for Immigration Review, an office in the Department of Justice, told BuzzFeed News: “DOJ generally does not confirm or comment on media speculation about regulations. Notably, however, despite inflation and rising administrative costs, EOIR fees have remained the same since 1986—despite increases in fees across many other areas of the federal government over the same period.”

Immigrants would still be able to apply for a fee waiver under the regulation.

Jamil said the fees could have an especially large impact on people currently in Immigration and Customs Enforcement detention or who were sent to wait in Mexico while their asylum cases are processed through the US immigration courts. For these two populations, the ability to obtain the appropriate money could be impossible.