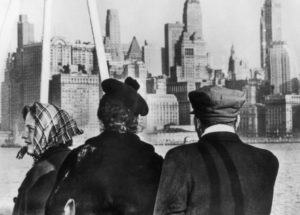 Congress had long ago established annual immigration quotas that discriminated against certain national origins, but White House officials considered even these quotas to be too generous. They brandished an obscure provision of immigration law that excluded visa applicants “likely to become public charges.” A new and stricter interpretation of the public charge provision could effectively reduce the quotas by as much as 90%. Advocates for immigration denounced the move as bad policy and as an overreach of executive authority, but most Americans seemed too preoccupied with their own problems to demand a change.

The president who announced this policy was not Donald Trump but Herbert Hoover, in 1930, after the start of the Great Depression. Hitler would come to power less than three years later. Raymond Geist, the U.S. consul in Berlin charged with applying immigration policy in Germany during much of the 1930s, saw firsthand the destruction the policy caused. The Nazis prohibited most German Jews from taking substantial assets out of the country, which meant they would be potential public charges unless they had close relatives in the U.S. with ample resources. As a result, American consuls rejected the applications of tens of thousands of people who could have made fine American citizens, thus trapping them in the escalating Nazi persecution.

In 1933, in the first term of Franklin Roosevelt’s presidency, his Administration considered changing the public charge clause to allow for the entry of more refugees from Germany. (At the time the United States did not distinguish between immigrants and refugees, nor was there any such thing as political asylum.) But immigration was a sensitive issue with the public and Congress—and Jewish immigration particularly so: some of Roosevelt’s critics called the New Deal the “Jew Deal.” There were State Department officials who thought American Jewish protests against Nazi persecution were exaggerated and artificial, part of a Jewish scheme to ease American barriers to increased immigration.

Responding to criticism from liberal forces inside and outside the administration, in July 1933 the State Department instructed consuls abroad that they should deny visas only to individuals who would probably become public charges. But it also signaled that they should still keep immigration down, and over the next year the total from Germany rose only slightly. More than 80% of the German quota remained unused.