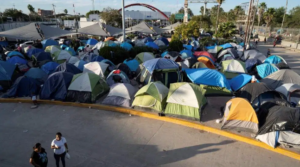 The Supreme Court will allow the Trump administration to continue to force asylum seekers back to Mexico while they await their US court dates.

In an order on Wednesday, the court overturned the Ninth Circuit Court of Appeals’ decision to block the Department of Homeland Security from enforcing the so-called Remain in Mexico policy that makes asylum seekers spend months waiting in dangerous border cities. Justice Sonia Sotomayor was the only dissenter.

“The Court of Appeals unequivocally declared this policy to be illegal,” Judy Rabinovitz, special counsel in the American Civil Liberties Union’s Immigrants’ Rights Project, said in a statement. “The Supreme Court should as well. Asylum seekers face grave danger and irreversible harm every day this depraved policy remains in effect.”

The Trump administration began returning asylum seekers to Mexico in January 2019. Since then, roughly 60,000 people have been sent back while they wait for hearings at court facilities on the US side of the border. The advocacy group Human Rights First has documented more than 1,000 public reports of people being violently attacked while waiting in Mexico.

In Mexico, the policy, officially known as the Migrant Protection Protocols, has forced asylum seekers to remain in crowded encampments that lack running water and adequate medical services. In the United States, Remain in Mexico has wreaked havoc on the immigration court system and people’s ability to receive a fair hearing. As one attorney put it to Mother Jones, the policy is “a fucking disaster that is designed to fail.”

Earlier this month, the Ninth Circuit ruled that it would block the program in Arizona and California starting on Thursday, unless the Supreme Court overruled it. A three-judge panel decided that the program clearly violated the United States’ obligation not to return asylum seekers to danger, which is known as refoulement in international law. The judges held:

Uncontradicted evidence in the record shows not only that asylum officers implementing the MPP do not ask whether asylum seekers fear returning to Mexico.