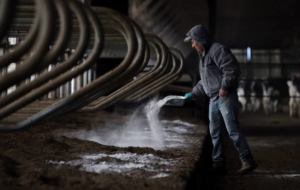 Senate Republicans and Democrats are inching closer to a deal on an immigration bill that farmers say if passed could help reduce food prices in part by helping them hire more workers.

This measure, known as the Farm Workforce Modernization Act, is focused mainly on updating the food production workforce, a system some call outdated and that has led to higher food prices especially for dairy, meat and vegetables.

It would do this by allowing more farmers — like dairy and pork producers — to hire temporary workers year-round. Currently, year-round employers cannot use that worker visa program, known as the H-2A temporary agricultural program used by seasonal employers. It would also satisfy some goals for labor rights advocates by providing a pathway to legalization for workers who show a dedicated history of farm work.

But Senate negotiators writing the bill are stuck on a little-known provision centered on those H-2A workers: whether they should be allowed to sue their employers if they believe labor laws have been broken.

That provision’s biggest foe is the American Farm Bureau Federation. The Farm Bureau, often known for its more conservative stances, has long been the agriculture lobbying giant in Washington.

The bill received large GOP support in the House, where it passed twice. And members are anxious for their Senate counterparts to finally finish writing and introduce a bill. The split within the GOP over agriculture labor reform, led by Farm Bureau influence, threatens the prospects of a final deal as time runs out.

Republicans on the Hill are accusing each other of not understanding the urgency of the bill, or even what it could do.

“It’s sitting over on the Senate side waiting to move over there because there are people creating misperceptions about what the bill does,” said California’s Doug LaMalfa.