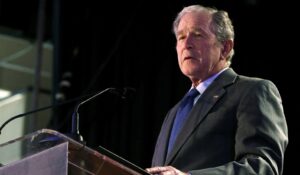 It’s not 2007 again. But apparently no one has told George W. Bush.

To coincide with the release of a book of his paintings of immigrants, Out of Many, One, the former Republican president wrote an op-ed in the Washington Post plugging the sort of immigration package that went down to defeat in both his administration and in the administration of his successor, Barack Obama.

Bush is an unusually sincere, earnest politician whose views on immigration are deeply felt and honestly come by — they are just anachronistic, or should be.

If there’s any lesson that everyone should have learned from Donald Trump’s takeover of the Republican Party, it’s that the party’s old consensus on immigration is no longer sustainable.

Yet there’s still a reflex toward the lazy conventional wisdom that all that ails the country on immigration is lack of an agreement to give an amnesty to illegal immigrants already here and increase numbers of legal immigrants, in exchange for more bells and whistles at the border — what is commonly known as “comprehensive immigration reform.”

Bush says not passing immigration reform is his biggest regret, and John Boehner, out with a score-settling memoir of his time as speaker of the house, says it is his second biggest regret (after not forging a big fiscal deal with President Obama).

Boehner spends a lot of time meditating on how the GOP became, in his telling, “Crazytown,” a party of extremists and paranoiacs that eventually threw itself into the arms of Donald Trump.

The former speaker spreads the blame widely, but it evidently doesn’t occur to him that one major factor driving a wedge between the party’s establishment and its grassroots was the elected leadership’s insistence on repeatedly trying to pass immigration bills that Republican voters rejected.