Last week at the National Conservatism Conference, University of Pennsylvania law professor Amy Wax stirred up controversy with a comment about immigration that, yanked out of context, seemed clearly racist. In context, it’s not racist. It’s just wrong. And the reason it’s wrong should help us understand a vital truth: American civilization is now quite clearly distinct from European civilization, and that’s a good thing indeed.

First, here’s what Wax said about immigration and race (via Vox’s Zack Beauchamp, with the most controversial elements highlighted): 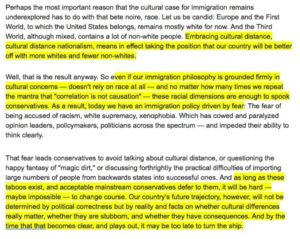 Here’s the argument in a nutshell. Immigration policy should take culture into account, and the culture that most closely matches our own comes from Europe and the “First World.” Depending on how you define the “First World” (lots and lots of people live in China and Japan), that region is mostly white. So, proper immigration policy will result in more white immigrants even if the intent isn’t to bring in more whites.

She derides contrary arguments, including the idea that immigrant populations from all regions assimilate well into American culture, as the “happy fantasy” of “magic dirt” — the idea that mere presence in America transforms immigrants into productive members of the American civilization

I’ve got three principal objections, the first of which is easy and obvious. There’s quite a bit of evidence that nonwhite immigrants (including nonwhite immigrants from developing countries) do very well in a key measure of American assimilation — economic industry. Yes, immigrants from Europe tend to do well, but Indian-Americans are a dominant economic force. The latest data from the American Community Survey demonstrates that Indian-Americans have a median household income of $114,261. Indian-Americans come from a nation that’s nonwhite, non-Western, and not part of the First World.