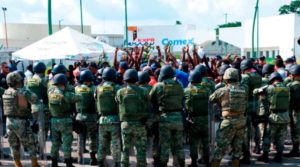 (CNN) Another photo of a parent and child near the river that divides the United States and Mexico has sparked an outcry — online and in halls of power.

He reaches out and grabs the woman’s backpack, yanking her away from the river she is steps away from reaching. Another man wearing camouflage and holding a large gun blocks their path.

The men in the photograph are members of Mexico’s new National Guard. And the photo, taken several days ago in Ciudad Juárez, Mexico, by photographer Hérika Martínez for Agence France-Presse, circulated swiftly on social media after the news agency tweeted it.

Nighttime news shows discussed it. Reporters grilled Mexico’s President about it during his daily press briefing.

The photo shows several migrants from Nicaragua who troops intercepted Friday as they tried to cross the border, Martínez told CNN. One woman had been traveling with her husband and two daughters. They made it across the river. She didn’t.

Reactions to the photo are mixed

Martínez, who’s been a journalist in Juárez for more than a decade, said the changing dynamic in the border city is palpable with the recent surge in troops there.

“It’s very different than what we’re used to,” she said. “And very visible.”

Reactions to the photograph — and what it represents — have been mixed.

“There are as many comments in favor of it as against it,” Martínez said.

Many critics weighed in with a common reaction: Mexico is becoming Trump’s border wall.