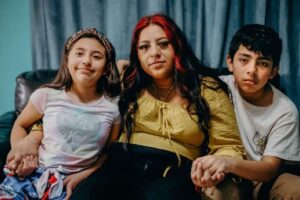 On the morning of Jan. 14, construction worker Juan Reyna said goodbye to his wife and two stepchildren in San Antonio and headed to Uvalde in his white Chevrolet pickup with a work crew of five men to do a home renovation job.

But Reyna and his crew didn’t make it to the job site. Border Patrol agents pulled them over near Uvalde after someone called the nearby Border Patrol station to report a truck picking up “a group of illegal aliens.” The other men in the truck, who Reyna said he didn’t know well before recruiting them for the project, tried to flee the scene and were eventually arrested.

The agents found a gun and a magazine full of bullets in the truck, according to court records; Reyna, 48, said the weapon wasn’t his. Reyna and his lawyer say they don’t know who the gun belongs to.

Reyna, an undocumented immigrant from Mexico, was taken into custody by U.S. Immigration and Customs Enforcement and placed in the agency’s detention center in Pearsall, where he’s remained for 11 months as he fights the government’s efforts to deport him to Nuevo León, the Mexican state he left more than two decades ago. He hasn’t been charged with a crime.

An ICE spokesperson didn’t say why authorities have been holding him in custody for nearly a year, saying it “does not comment on pending litigation.” But according to Reyna’s lawyer, ICE attorneys believe Reyna is a flight risk and a threat to public safety because of a previous deportation and a 2000 misdemeanor in Dallas.

“I just want to be free and appreciate time with my family,” Reyna said in a phone interview from the detention center. “I feel sad because my wife is going through a hard time and she doesn’t have my support because I’m inside.”