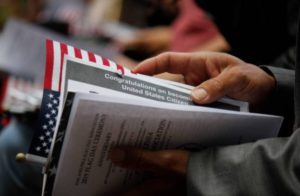 The foreign-born population has declined in U.S. states that voted Democratic in 2016, and increased in states and metros that voted for Trump.

President Trump’s crackdown on immigration is having its effect, but in unexpected ways. Overall, immigration to the U.S. has slowed dramatically, because it has declined in coastal states. However, perhaps ironically, it is Trump-voting states and metropolitan areas that have registered the largest gains in immigrants.

Those are some of the key takeaways from a new analysis of American Community Survey data by Brookings Institution demographer William Frey, a leading expert in the geography of immigration.America’s foreign-born population grew by slightly more than 200,000 people in 2017-18, the smallest increase yet since 2010. In other years this decade, the foreign-born population increased by more than twice that amount; in 2013-14, it grew by more than 1 million people, or roughly five times the 2017-18 increase.

Despite this recent slowing of growth, America’s total foreign-born population stands at an all-time high of close to 45 million. That’s 13.7 percent of all the people in the United States—a share that’s about one percentage point lower than the all-time high of 14.7 percent, back in 1910, reflecting the great immigration wave of the late 19th and early 20th centuries.

The largest recent immigration gains have been concentrated in states and metros that backed Trump in the 2016 election. In 2017-18, in Trump states, the immigrant population surged by nearly 300,000, whereas it declined by more than 100,000 in states that voted for Clinton. Metros in the South and Rust Belt saw the biggest gains, while some large coastal metros on the East Coast, plus the San Francisco Bay Area, Los Angeles, and Chicago, saw considerable declines. Frey writes:

[T]he new “21st century immigration” is trending away from states that voted for the 2016 Democratic candidate, Hillary Clinton, toward states that voted for Trump. … In fact, over the last year, Clinton states, as a group, registered declines in their foreign-born populations—including substantial declines in New York and Illinois—and more modest declines in California, New Jersey, and Maryland, among other states. Meanwhile, Florida and Texas exhibited significant gains, as did other Trump states including Arizona, Pennsylvania, and Ohio.