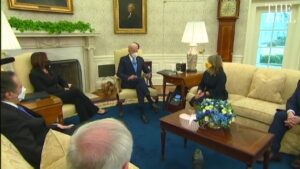 President Biden is swinging for the fences on immigration, betting that the nation as a whole has become more liberal on the issue. But some in his party worry he could strikeout.

The skeptics in Democratic circles worry that an electorate grappling with a once-in-a-lifetime pandemic will be unenthused about opening up a new battle over a historically divisive issue.

Advocates of reform point to polls suggesting widespread public support, not just for legalizing the status of people brought to the U.S. as children — the so-called Dreamers — but also for a path to citizenship for the unauthorized immigrant population at large.

An eight-year path to citizenship is the central component in legislation introduced Thursday by Sen. Bob Menendez (D-N.J.) and Rep. Linda Sánchez (D-Calif.). The proposal, which has Biden’s backing, also calls for aid of $4 billion for Central American nations to try to ameliorate some of the economic forces that propel immigrants northward.

The Republican Party — which has taken several steps in a more hawkish direction on immigration during the Trump years — largely hates the proposal.

Rep. Jim Jordan (R-Ohio), a staunch supporter of the former president, issued a statement Thursday blasting the plan as a “radical proposal” that is also “a non-starter that should be rejected by Congress.”

To the extent that such attitudes are widespread in the GOP, they greatly complicate the prospects of the plan winning passage in Congress, where the Senate is split 50-50 and Democrats hold only a slim majority in the House.

By Niall Stanage for THE HILL
Read Full Article HERE