Home Resources The Long, Perilous Route Thousands Of Indians Have Risked For A Shot At Life In U.S. 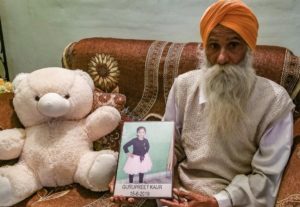 A poster-size photo of a little girl in a frilly pink tutu has pride of place on the wall of her grandparents’ stately home on the fertile plains of northern India. An album of baby photos is propped on a side table, alongside a gigantic plush pink teddy bear.

They’re all that Gurmeet Singh and his wife, Surinder Kaur, have left of their 6-year-old granddaughter. She died on June 12, 2019, of heatstroke in the desert near Lukeville, Ariz., some 8,000 miles from home.

It was 108 degrees Fahrenheit. The girl, Gurupreet Kaur, and her mother had just crossed illegally into Arizona from Mexico, part of a group of Indian migrants. Gurupreet’s father had gone ahead to the U.S. in 2013, a few months after his daughter was born, and was waiting for them. Mother and daughter left home in early 2019.

“I cry now when I look at her picture. I keep remembering how I used to hoist her up onto my shoulders,” says Singh, a sinewy farmer in his 70s with a long white beard and wearing an orange turban.

“I tried to stop them from leaving. We have a big house. We could provide for them here,” recalls Singh, speaking with NPR at his home in the village of Hasanpur, in northern India’s Haryana state, in late January. “They didn’t need to go abroad.”

But Singh says his son didn’t want to be a wheat and rice farmer like him. His son and daughter-in-law kept their emigration plans a secret, he says, and left without warning.

In a statement issued last year from New York City, where the couple now lives and has applied for asylum, they said they left India because they were “desperate” and wanted “a safer and better life” for their daughter. But they have never explained why they felt unsafe in India and made what they called an “extremely difficult decision” to embark on such a risky journey.