Home Resources ‘The Intersection of Racial Justice and Immigrant Rights’: Why Immigration Is an Issue Black Voters Should Care About in 2020 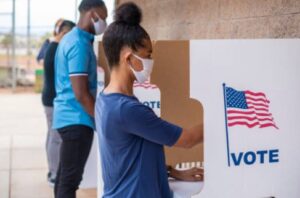 Nana Gyamfi has the 2020 election on the brain, specifically what the future holds for Black immigrant populations in the United States.

“If there’s a Biden presidency, you know, I’m expecting that immigrant rights will change based upon the pressure that we provide on the ground, in the streets. What do we do as a community? What do we do as organizers?” asked the Executive Director of Black Alliance for Just Immigration (BAJI).

Gyamfi, who serves as an attorney and also co-founded Justice Warriors 4 Black Lives, says race is an integral part of how immigration functions in the US.

“Immigration, at its core, is really about defining this country as a white ethnostate in terms of power and privilege. And so white Europeans do not threaten that,” she said. “You don’t see ICE going around [St. Patrick’s Day parades] looking for the undocumented Irish people and trying to figure out how they can gather them up. But they will come to a Caribbean carnival. They will come to an African festival. But they won’t do that with white folks because the white people they’re not worried about.”

The Trump administration has not shied away from using immigration law to bolster its white supremacist beliefs, whether by effectively slaughtering the nation’s refugee system, allegedly referring to Haiti and African nations as “shithole” countries, or enacting a Muslim ban that Gyamfi refers to as “an African and Muslim ban at this point, that is preventing people from certain countries from coming into the United States, including Nigeria, a country with the most Black people on planet Earth.”

But that doesn’t mean Trump singlehandedly built the walls, cages, and detention centers that are currently set up.

“These are pieces of machinery that have been in place, used by prior administrations. Just used with more intensity,” said Gyamfi.