Home Resources The House passed a bipartisan bill that could legalize 325,000 unauthorized immigrants 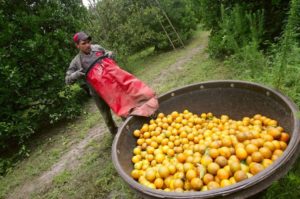 The House passed a bipartisan bill Wednesday night that could give legal status and a path to citizenship to hundreds of thousands of unauthorized immigrants working in agriculture.

The legislation, the product of months of discussions, represents a rare moment of bipartisan agreement on one of the most contentious topics of the Trump administration, ultimately passing by a vote of 260-165 and attracting 23 Republicans.

The bill could legalize up to about 325,000 immigrants currently working in agriculture who do not have legal status. It’s still only a fraction of the 12 million unauthorized immigrants estimated to be living in the US and the more than 2 million that would be legalized under the “Dream and Promise Act” that passed the House in June. But it’s the biggest legalization effort supported by Republicans in recent memory.

Republicans are usually reluctant to back any kind of legalization of unauthorized immigrants — immigration restrictionist groups have lambasted the bill as a means of securing “cheap foreign labor” at the expense of American workers — but the lawmakers represent districts where agriculture is a major industry.

The Senate still has to agree to vote on the bill. But its success in the House signals that a piecemeal approach to immigration reform could be more feasible than a comprehensive bill like the “Gang of Eight” proposal that failed in 2013. A similarly narrow bipartisan bill that would have eliminated per-country caps on employment-based green cards passed the House in July with significant bipartisan support before it was ultimately blocked in the Senate in September.

“I am thankful that the House advanced this effort to protect our existing farmworkers and promote an enduring workforce for agriculture. I look forward to working with our colleagues in the Senate to get this bill passed into law.” Rep. Jimmy Panetta (D-CA), who helped lead the negotiations, said in a statement Wednesday.