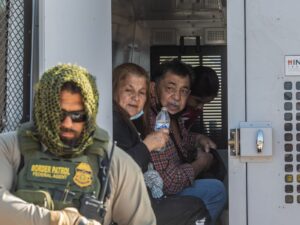 President Joe Biden has taken some steps toward reversing his predecessor’s legacy of broad, indiscriminate immigration enforcement, including a recent announcement that it will no longer detain immigrants at two locations under scrutiny for alleged abuses.

But Republicans are adamant that increased immigration enforcement be a prerequisite to any broader immigration reform.

“There’ll be no immigration reform until you get control of the border,” Sen. Lindsey Graham (R-SC) told Roll Call last month.

There are now nearly 40 percent more people in immigration detention compared to when Biden first took office, and his administration is continuing to turn away most migrants arriving on the border under pandemic-related restrictions put in place by his predecessor, President Donald Trump, which have led to the expulsions of more than 350,000 people this year alone.

But research shows that the threat of detention and deportation in the US doesn’t dissuade migrants from making the journey to the southern border, especially if they are victims of violence and may be seeking to escape the “devil they know” in their home countries.

“Managing migration at the border, particularly the kind of migration we’re seeing now, from a strictly deterrence, enforcement lens is just not sustainable in the long run and is not having the impact that people think it should have,” Theresa Cardinal Brown, managing director of immigration and cross-border policy at the Bipartisan Policy Center, said. “That’s why we need to rethink our paradigm for how we talk about migration and everything that we do at the border.”

The US started dramatically ramping up immigration enforcement in the 1990s with bipartisan support. The line of thinking was that making it more expensive and arduous to cross the border would dissuade more people from making the journey in the first place.