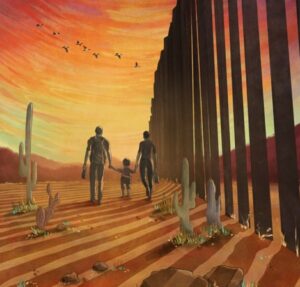 In 2018, I met a 29-year-old man I’ll call Alex (to protect his identity) at a soup kitchen for migrants in Nogales, Sonora, just across the U.S.-Mexico border from Nogales, Arizona. Most of the migrants were families with young children who came from Central America and the state of Guerrero, Mexico, fleeing poverty and violence fueled by a legacy of U.S.-backed military coups and corporate plundering. They had come to seek asylum in America.

Alex was different. His parents brought him to the U.S. from Honduras when he was 7, and he grew up in New York City undocumented. At 21, he got into a fight, and the police were called. Immigration and Customs Enforcement eventually deported Alex, separating him from his infant son. He spent the next eight years in Honduras. Now, knowing he had no chance of asylum and no legal way to return to the U.S., Alex planned to cross the border illegally. “I’m trying get back to my son,” he told me.

A month later, Alex called me. He was staying with a friend in Tennessee, after spending 12 days crossing a deadly stretch of the desert from outside Nogales, Sonora all the way to Phoenix, Arizona, walking more than 150 miles, mostly alone. He survived, he thought, because of his military training; Alex had served briefly in the U.S. military reserves.

Without knowing his story, it would be easy to categorize Alex as either a victim or a criminal. But he was neither. He was a boxing aficionado, a construction worker and above all, a father who desperately wanted to be reunited with his son. But like so many, he was caught in the web of U.S. immigration policies.

Three new nonfiction books examine the failures of those policies, from the flawed, outdated science that shaped them, to the current wall-building fiasco, and, finally, to what it might take to create a more effective, and just, immigration framework.