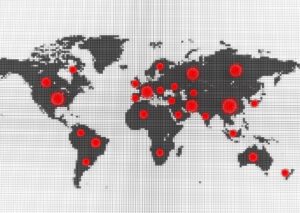 In the early days of the Covid-19 pandemic, the Trump administration issued a public health order known as “Title 42” that allowed the U.S. government to expel undocumented immigrants to Mexico or their home countries to prevent the virus’ spread. Under Title 42 authority, the threat of Covid-19 transmission was used to deny migrants a chance to seek protection from persecution as required under U.S. laws and international treaties. Using this policy, the U.S. government has expelled more than 1.7 million undocumented immigrants from the southern border over the past two years.

While campaigning, President Biden criticized the Trump administration’s immigration policies and promised to create a more humane system. However, the Biden administration kept Title 42 in place to expel new arrivals as border crossings surged following his election. President Biden has faced mounting pressure to end the program from both Democrats in Congress and the courts. Notably, a federal appeals court in the District of Columbia unanimously ruled in March that the administration could not expel migrant families to nations where they might face persecution or torture.

Soon after, the Centers for Disease Control and Prevention (CDC) announced that it will phase out Title 42 by May 23rd, stating that the pandemic has abated enough to resume normal immigration processing for asylum seekers. CDC Director Rochelle Walensky explained that “while the introduction, transmission, and spread of COVID-19 into the United States is likely to continue to some degree, the cross-border spread of COVID-19 due to covered noncitizens does not present the serious danger to public health that it once did, given the range of mitigation measures now available.” In response to the CDC’s announcement, Department of Homeland Security Secretary Alejandro Mayorkas stated that they “have put in place a comprehensive, whole-of-government strategy to manage any potential increase in the number of migrants encountered at our border” and they “are increasing [their] capacity to process new arrivals, evaluate asylum requests, and quickly remove those who do not qualify for protection.”

Despite these assurances, the rescission of Title 42 has been met with mixed reactions. Immigration advocates have celebrated the restoration of asylum processing at the U.S. border. Lee Gelernt, the American Civil Liberties Union lawyer who filed the main lawsuits against Title 42, applauded the wind down of Title 42 through which “too many lives have been destroyed already.” However, both Republicans and a growing number of Democrats have expressed concern that the expected surge in illegal crossings due to the rescission of Title 42 – which are already at record levels – will overwhelm our beleaguered border control system.

These lawmakers are therefore beginning to distance themselves from the Biden administration’s decision to lift Title 42. In particular, several Democrats who are facing tough elections are calling for a delay in the rescission of Title 42 until there is a detailed plan in place to deal with the increase in border crossings once the policy ends. Sarah Godlewski, Wisconsin state Treasurer and Democratic Senate candidate, states “There needs to be a plan, and right now it doesn’t look like the administration has one. Until there is a plan, for the safety of our citizens and those seeking asylum, they should not lift [Title 42]”. Further, Democratic Senatorial Campaign Committee Chair Gary Peters (D-Mich) has said that Democratic senators and candidates are “right to raise questions” about the policy.

Polls show that immigration is one of the toughest areas for Democrats this fall with independent voters. As explained by Domingo Garcia, president of the League of United Latin American Citizens, “If you have a surge of immigrants at the border, if you have mass catch-and-release policies put in place, I think you’re putting all those Democrats in terrible political jeopardy.”

The U.S. government has taken some important steps to prepare for the rescission of Title 42. They have established a southwest border coordination center ran by FEMA Regional Administrator, MaryAnn Tierney. They have announced that they are expanding holding facilities, arranging for bus and air transport to relieve crowding, making plans to provide coronavirus vaccines to migrants taken into custody and have reassigned about 400 CBP officers to the southwest border in anticipation of the impeding surge.

Yet these preparations may not be nearly enough. In March alone, 220,000 migrants crossed the border – more than 7,000 migrants per day on average – the highest number in more than two decades. As reported by NBC News, the DHS now estimates that when Title 42 ends, those numbers could climb to between 12,000 and 18,000 migrants per day. Lawmakers and their constituents are understandably wary of the lifting of Title 42 without an organized, well-designed, and appropriately funded plan in place to effectively manage the unprecedented number of migrants expected to seek asylum in the U.S.

The Biden Administration is right to restore the protections provided by domestic and international law to protect migrants from persecution. Its actions are laudable and worthy of our support. However, it is critical that the administration meet the growing challenges at our southern border with vision, commitment, and the necessary resources to ensure the safety and well-being of both our own citizens and our neighbors in peril as well.