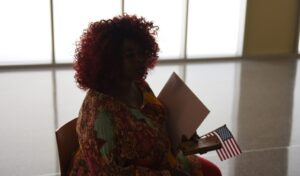 If you were comparing immigrants to the United States from Algeria and Israel and were asked which group had higher levels of education and skills, you’d probably assume the answer is the Israelis. After all, the average Israeli has completed 12.5 years of schooling, compared with 7.6 years for Algerians, according to the American Community Survey.

But you’d be wrong. Algerian immigrants to the U.S. are not only better educated than those from Israel, they also have completed more schooling than the average, native-born resident of the United States.

What explains this seeming oddity? It’s the built-in bias of the U.S. immigration system, which heavily favors applicants who have family ties in the United States, says Stanford Graduate School of Business economist Edward Lazear. Since there are relatively few Algerians living in the U.S., the immigration process requires that Algerians seeking to enter the country must do so primarily on the basis of their skills.

If this unexpected outcome applied only to immigrants from a few countries, it wouldn’t be significant. But recently published research by Lazear found flaws in long-held theories of how immigrants with varying levels of educational attainment manage to migrate to the United States and other advanced countries.

Market Forces vs. Regulations
Since the 1960s, immigration was understood to resemble market-driven investment decisions. People would weigh the costs and benefits of migration in much the same way they might choose to change occupations. Highly skilled people living in countries where they are underpaid for their abilities were likely to move to countries where their experience would be better rewarded.

When looking at historic migration within the U.S. — from one part of the country to another — that’s a reasonable theory, Lazear says.

In the first half of the 20th century, for example, millions of African Americans migrated from the South to the industrial centers of the North.