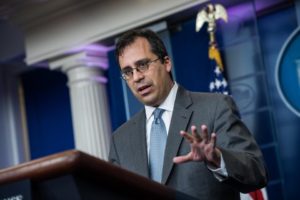 On February 22, 2018, U.S. Citizenship and Immigration Services (USCIS) released a controversial memo designed to make it difficult (some say “impossible”) for professionals in H-1B status to provide services at the site of their employer’s customers. The USCIS “third-party placement” memo is one of a series of moves by the Trump administration to restrict the use of H-1B visas and, not surprisingly, it has resulted in litigation.

On May 1, 2018, Jonathan Wasden, an immigration attorney, filed the case of Small and Medium Enterprise Consortium (SMEC) v. DHS in the U.S. District Court, District of New Jersey. Wasden was a trial attorney in the Office of Immigration Litigation at the U.S. Department of Justice and an attorney in the USCIS Administrative Appeals Office (AAO).

Today, all major U.S. companies contract out for services in order to focus on their core line of business. Both the companies and their contractors are engaging in something economists consider beneficial to a well-functioning market economy – specialization. The limited availability of workers with certain technical skills has made such contracts even more important today.

The USCIS policy memo is seen by some as an attempt by the federal government (or at least some government officials) to tell companies how to organize their businesses and to specify which employees may provide services at customer sites. “Companies in the information technology (IT) services, management consulting, healthcare, and staffing fields are going to feel this change most acutely as it requires increased documentation to gain approval of an H-1B petition if the visa holder will work at a customer site,” Vic Goel, managing partner, Goel & Anderson, told me in an interview in March 2018. “In such cases, USCIS has indicated it will require employers to provide detailed documents proving their clients have confirmed an H-1B worker’s job duties, the degree requirement for that job, and how long the job will last.”